Yesterday we went to the Burgfest parade. It came almost right in front of our apartment! It was a beautiful day and it was a beautiful parade. It lasted about 30 minutes and they had people dressed up like everything from kings and queens to farmers. The horses that were there were absolutely amazing. They had some that were incredibly huge.
It was so interesting to see all these people and be in the middle of a crowd and not hear a word of English unless you were the one speaking it! There were lots of people that were dressed up for the Burgfest that we got to watch before the parade even started. And just watching some of the Germans was interesting enough!
Here's some of my favorite pictures that I took of the parade!
-Alex

Getting Started Again in Burghausen 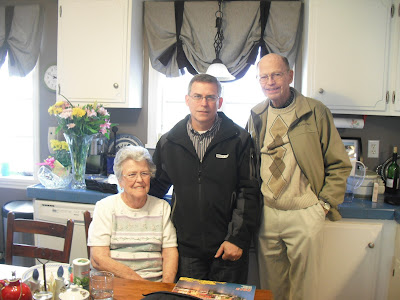 This is a picture right before we left Chattanooga.  What a wonderful picture of my parents! 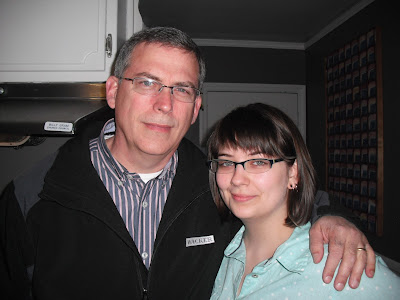 ...and a great picture of my daughter! 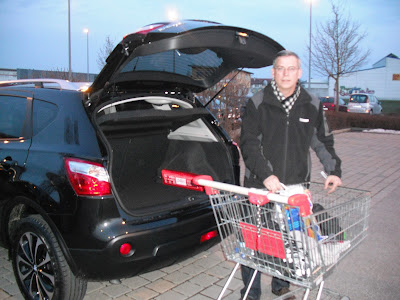 If you look on the right side, you can see some snow.  This was one of our first trips to Kaufland (kinda like a small WalMart). 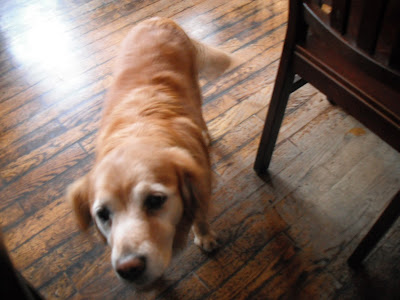 I love seeing dogs in restaurants.  This friendly chap just wanted to say hello and welcome us to town.  You see dogs almost anywhere you would find a human. Maybe someday this will be the case in Chattanooga. 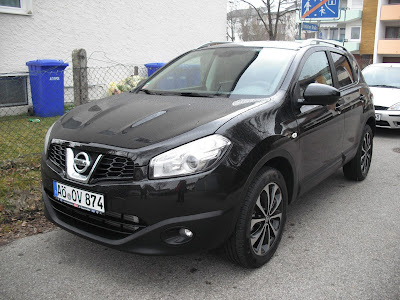 Our new buggy.  We have a Nissan Quashqui.  Big enough to seat 4 in comfort and small enough to fit in a German parking space.
Posted by Billy. ﻿
Posted by Deede & Billy in Europe at 2:06 PM No comments:

Email ThisBlogThis!Share to TwitterShare to FacebookShare to Pinterest
Labels: Burghausen, Food and Groceries 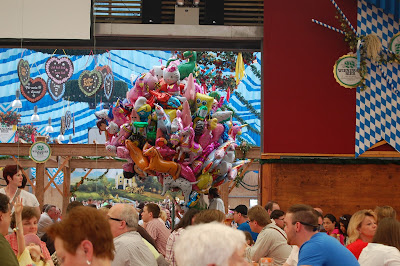 What an exciting time to be back in Burghausen.  Every year in May (Mai) the Bier Festival arrives. It's amazing to watch the entire city come out for this event day after day...kinda like Riverbend in Chattanooga.  It lasts for 10 days and the food/bier/entertainment/rides are first class.  The quality of their tents and equipment are first class...but what else would you expect out of a German.  The bier comes in "Mass", which equals to 1 Liter.  Three and a half of these is equivalent to one gallon. 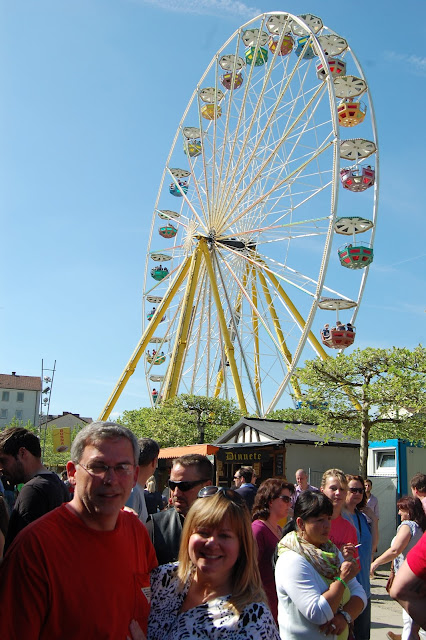 Our friend Daria took this picture. The weather was awesome and the Ferris Wheel was calling Deede's name.  I was off that day celebrating Jesus ascending into Heaven.  Yep, we get a day off for that. 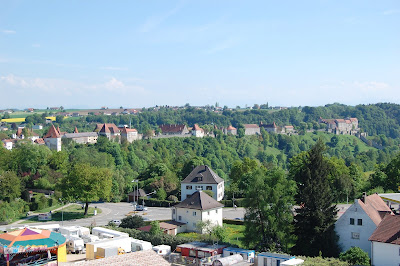 What a view of the Castle (Burg).  It's in the Guinness Book of World Records for the longest Castle in the World.  It is over a mile long.  On the left hand side is a yellow field of flowers.  Wow!  The colors were magical that day. 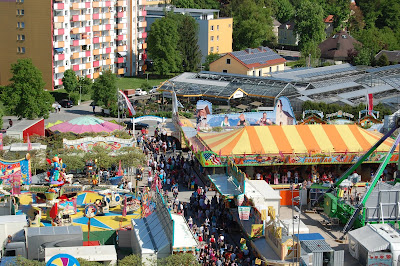 Another photo from the Ferris Wheel.  Since I am terrified of heights, taking these pictures kept my mind elsewhere.  It was about 3:00 pm and was very crowded.  It's amazing to see the local people support these events.  And even with this much beer being served, I never saw a single fight or argument.  ﻿ 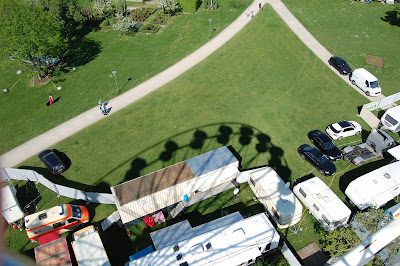 Beautiful green grass.  If you look close at the shadow, you can see me waving. (no, not really) 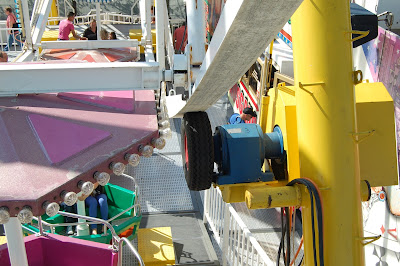 Being the engineer geek, I am fascinated at how things work.  This Ferris Wheel has 4 tires that turn the wheel.  The metal is rough so the tires can grip in wet weather.  Keep it simple.
Posted by Billy.﻿

Posted by Deede & Billy in Europe at 1:41 PM No comments:

Email ThisBlogThis!Share to TwitterShare to FacebookShare to Pinterest
Labels: Burghausen, Quality of Life

After leaving Salzburg on April 30th, we headed to the Chiemsee. "See" means lake in German. The Chiemsee is often called the Bavarian Sea. It would have been about an hour away from Burghausen if we hadn't diverted through Salzburg. 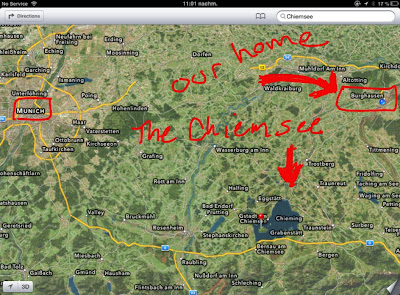 We stayed at a place called the Chiemsee Fischer. It was a beautiful place where their biergarten was in full bloom. The owner was a young Hungarian man. He said his parents had come with him to the Chiemsee and the three of them had worked together to refurbish this place as a hotel and restaurant. He said his parents had gone back to Hungary and he was now running it with a valued staff. I thought it was so amazing that his parents had done that for him. ...a very sweet story.  And the authentic Hungarian goulash I had that night was delicious! 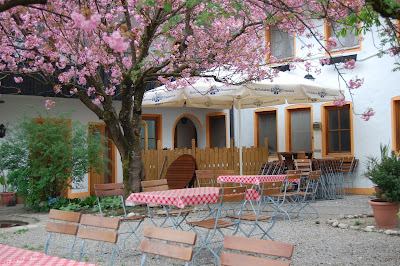 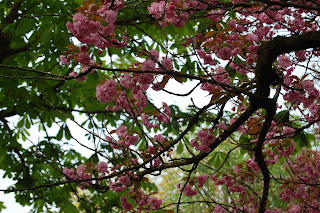 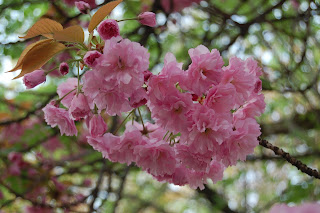 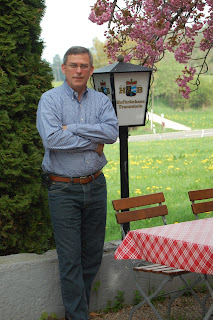 The weather was in the mid sixties and was too cool and breezy to sit in the biergarten for dinner. But it was perfect for taking pictures! 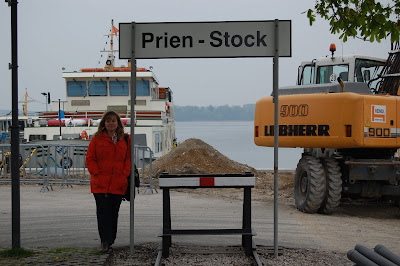 The next morning, taking a boat ride to the main islands on the lake was something that wasn't to be missed. We caught the ferry in the town of Prien. 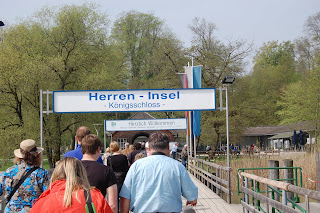 The largest island called the Herreninsel (Man Island), has a spectacular palace on it that was built by King Ludwig II of Bavaria. (He's the one who created the "Cinderella" castle that is so famous). This one was patterned after Versailles in France. Ludwig didn't live to see this one finished and it is still largely incomplete...which in some ways makes it more interesting to me. You are able to see its "bones" and see how it was constructed. The craftsmanship is beautiful. 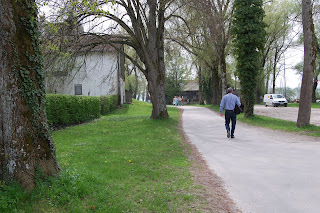 We spent the majority of our time on the Fraueninsel (Lady Island)
Every turn was a perfect picture and we strolled the whole island leisurely. It has a Benedictine convent there where the nuns produce a liquor that is sold in all the stores in our home area. 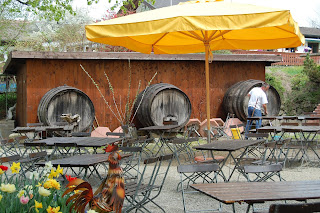 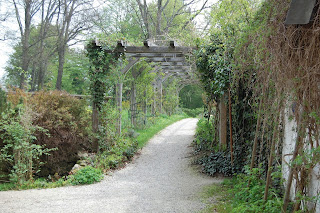 Eating torten and kuchen is a favorite pastime in the early afternoons, but we avoided the crowded terraces and biergartens and ate ice cream bars and drank sparkling water. Everything was just starting to bud out nicely and the temperature hit 70 degrees.
In spite of the sunshine peeking through, there were no views of the Alps ...except an occasional vague impression or an outline of the towering peaks beyond the lake.

Posted by Deede & Billy in Europe at 3:25 PM No comments: